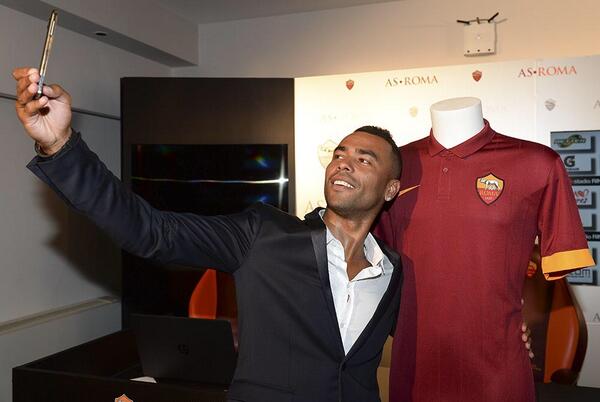 Ashley Cole has signed for Italian giants Roma following his release from Chelsea at the end of last season.

The 33-year-old signed a two-year contract on Monday after becoming a free agent this summer.

Upon his arrival in the city, Cole was mobbed by Italian fans at the airport as the club’s official Twitter account posted a picture of Cole at Rome airport and wrote, ‘Welcome to Rome, Ashley!’

Cole tweeted: ‘Happy to have signed my contract at Roma just want to thank everyone for your lovely messages. Will never forget my time in England was a pleasure, but now onto a new challenge’

A statement on the Serie A club’s official website read: ‘AS Roma have acquired Ashley Cole’s playing registration on a two-year deal which expires on June 30, 2016.

‘The agreement also gives the club the right to extend the contract into a further season.’

Rome-based newspaper Il Romanista ran the headline ‘Yes we Cole’ on their Sunday edition and reported that a two-year deal for the experienced left-back was already sewn up.

The former England defender was a free agent after leaving Chelsea and had interest from Monaco and various Major League Soccer franchises before choosing to switch to Italy.