Chelsea were forced to fight hard against a resilient Stoke defense at the Bridge. The European Champions now sit comfortably on top of the table with 13 points. A vocal Stoke support were left disappointed but they themselves can take a lot of positives from this fixture.

So, what can Chelsea take away from this well deserved victory?
1.Beautiful football is kicking in !

For the first time since 2002, I have seen such beautiful football being played at the Bridge. ﻿Among Mata, Oscar, Hazard, Torres and Moses there were about 10 backheels. Roman Abramovich has pressurised his managers into playing beautiful football and looks like Di Matteo might finally listen to him.

A 1-0 win just tells half the story to a neutral fan. At one point the possesion was 91 % to Chelsea and 9 % to Stoke City, but Stoke are one of the toughest sides to break down and Chelsea did well to constantly pressurize them.
2. Lampard’s days are coming to an end as well
It will be a tough moment for me when Lampard says goodbye just like it was tough for me to believe that the commentators will no longer scream Drogba.
In all the games that we have played and Ramires has played a part he has looked convincing only in the role he has played today. Brilliant while going front and brilliant while going back. He offered nothing on the wings and along with Mikel on his side, he broke attack after attack.
Lampard is having troubles adapting to a deeper role and if we are to assert our dominance, Ramires has to start.
3. Sturridge has to play
Before making this point, I have to say that I’m 110 % behind Torres, to get back to his best but at this point he is feeling no pressure. By using Daniel Sturridge, Di Matteo can send Nino a stern message that his place is not guaranteed. He is not fighting for it and Chelsea will need goals in future.
Torres had a good game, he chested the ball beautifully but completely mistimed the kick. He picked out players brilliantly but he doesn’t need to do that. We have 3 creative midfielders and they can do that. He has to move a bit upfront.
Believe it or not, Chelsea actually played False 9. Yes, False 9, the role Fabregas perfected for Spain.
4. Things are just going to be better with a German joining us
Remember Marko Marin? He was the most impressive player during pre-season and with him joining the midfield, clubs are going to find it very difficult to keep our players from skipping past them.
Oscar, Hazard and Mata showed everyone what they could do and this was supposed to be the time when they were “gelling” together.
5. We are young ! 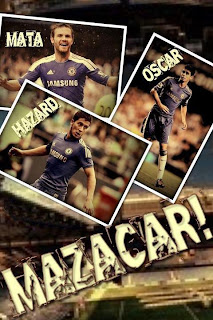 Gone are the days of the oldies ! Chelsea have one of the youngest squads in the English Premier League. 25.8 years was the average age of the Chelsea starting XI against Stoke City.
6. John Obi Mikel showed his class

He took in challenge after challenge, went after the ball, brilliantly covered for David Luiz and actually had a chance at goal. When fans were breathing down his neck , he showed us what separates the men from the boys. Along with Ramires, he broke play after play and hopefully Di Matteo will use this partnership again.
#Sherry Philips (@bluebloodSherry)
(function(d){ var js, id = ‘facebook-jssdk’; if (d.getElementById(id)) {return;} js = d.createElement(‘script’); js.id = id; js.async = true; js.src = “//connect.facebook.net/en_US/all.js#xfbml=1”; d.getElementsByTagName(‘head’)[0].appendChild(js); }(document));
Share FacebookTwitterGoogle+ReddItWhatsAppPinterestEmail

David Luiz: The Life & times of a young Geezer