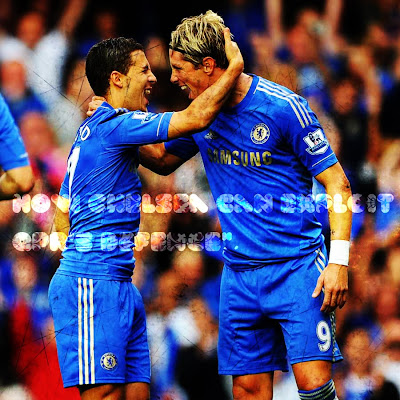 Off-the-field issues have dominated most of the build-up to tomorrow’s match against QPR. People are mostly bothered about whether Anton Ferdinand will shake Ashley Cole & John Terry’s hand or how much abuse John Terry will have to hear from the Hoops fans. But amid all the controversies & bad blood, most seem to have forgotten the tactical side of tomorrow. Luckily I haven’t. So let’s take a look at how Chelsea can dominate QPR tomorrow.

The last 2 League matches between the West London rivals have made the news for different reasons. While the corresponding fixture last season was won 1-0 by QPR, the match is mostly remembered for non-football reasons. The match in itself was exciting, with Chelsea being reduced to 9 men yet still coming close to snatching a point or even a win. But the supposed racial of abuse of Anton Ferdinand by Chelsea skipper John Terry & the resulting fall-out is all that is talked about.

When Chelsea played QPR at the Bridge, the race issue was still fresh in the minds of both QPR & Chelsea fans. The match, however, will be remembered by most Chelsea fan for Fernando Torres’ hat-trick. El Nino was beginning to find some form under then-interim boss Roberto Di Matteo & his hat-trick help power Chelsea to a 6-1 win.

Both teams have undergone drastic changes since that last encounter. While Chelsea managed to win the FA Cup & Champions League, QPR just about managed to avoid relegation. The fall-out for both clubs was the same: buy new players. While Chelsea have further strengthened their attack, QPR have had to work hard on both their attack & defence. The major difference is this: while Chelsea look a more complete team than they did last season, QPR are still very much a work in progress. Funnily enough, QPR look far weaker defensively than they did last season.

You probably think I’m being biased here, but hear me out. 2 of QPR’s major defensive recruits are Jose Bosingwa (signed on a free after Chelsea released him) & Fabio Da Silva (on loan from Manchester United). While Chelsea fans are very well-versed with Jose Bosingwa’s defensive shortcomings, some of us may be a little unfamiliar with Fabio. For those who don’t know, Fabio is also extremely suspect defensively. Throw in the fact that they have Anton Ferdinand in the heart of their defence (his biggest claim to fame is the fact that Barcelona were once interested in him) & one can conclude that QPR’s defence is shaky.

On the other hand, Chelsea have added players like Eden Hazard, Victor Moses, Oscar dos Santos & Marko Marin to their attacking repertoire. With Juan Mata & Fernando Torres already present at the club (the Spanish duo’s link-up play in Chelsea’s 6-1 win was excellent to say the least), it’s pretty clear that Chelsea have a deadly attack. All of the players mentioned above are threatening in their own way & it while it’s obvious that all of them won’t be starting, there is no doubting the fact that whichever players do start will trouble QPR’s defence.

At the same time, it must be noted that QPR have a decent attack as well. Clever signings like Esteban Granero, Ji-Sung Park & Junior Hoilett (just to name a few) mean that they will be a lot more threatening going forward. So while Chelsea can indeed destroy QPR’s defence, Chelsea’s back-four must also be wary of QPR’s newly-added potency up front.

But there is one simple way to blunt QPR’s attack: get an early goal. If Chelsea get a goal within the first 10-15 mins, it will allow the team to settle down into a passing rhythm & ensure that QPR get very little possession. You can’t score if you don’t have the ball. If all goes to plan, QPR could be in for a very long day 90 minutes at Loftus Road. I sure hope that happens.

Our support to our Legendary Captain JT & about how the world has misunderstood him!
John Terry | We Stand By You | We love you JT, Our LEADER!