!function(d,s,id){var js,fjs=d.getElementsByTagName(s)[0];if(!d.getElementById(id)){js=d.createElement(s);js.id=id;js.src=”//platform.twitter.com/widgets.js”;fjs.parentNode.insertBefore2 wins out of two and at top of the Premier League table, Chelsea are off to a flying start in the Premier League this season and things cannot get better for Di Matteo’s men. After a convincing 2-0 win in the first game, Chelsea were made to work hard by newly promoted club as they came from behind to win 4-2. Eden Hazard picked up his second Man Of The Match award after another sensational display setting up 2 of Chelsea’s 4 goals and winning a penalty as well. A lot was being said whether Hazard could settle in the Premier League and although its just the start of the season the young Belgian has been in sensational form.
Chelsea will go into this game with addition of 2 new players- Victor Moses and Cesar Azpilicueta both being announced in the past 2 days. Though it looks unlikely that Moses will play any part against Newcastle but Azpilicueta might get a start if Chelsea’s defensive vows aren’t solved.
On the other hand Newcastle go into this game after a good convincing win against Tottenham Hotspurs and a mid-week draw against Atormitos. Alan Pardew made 9 changes to the side that played Atormitos resting his key players for the game against Chelsea. Last season Magpies ended their poor run at Stamford Bridge with a 2-0 win thanks to a wonder goal by Papis Cisse.
Team News-Chelsea: Along with the obvious absentee Marko Marin, Chelsea will be without captain John Terry who suffered a neck injury against Reading in the mid-week and David Luiz still looks doubtful. Highly unlikely that Victor Moses might get a chance in this game but Cesar Azpilicueta might make an appearance if the defensive troubles are not solved.
Expected Line-up 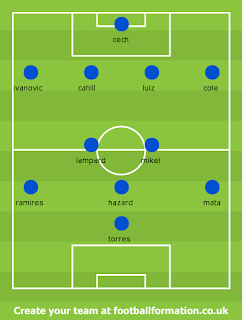 Team News-Newcastle United: Newcastle made 9 changes to the midweek Europa Cup game against Atormitos with Papis Cisse the only notable name in the starting XI. Alan Pardew will have late fitness check on 4 players-Fabricio Coloccini and striker Demba Ba have had respective thigh and shin problems, while Cheick Tiote (calf) and Shola Ameobi (hamstring) remain doubts.
Expected Line-up 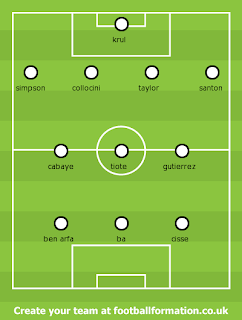 Player to Watch-Chelsea: Eden Hazard- Second game running Eden Hazard gets my pick as the “Man to Watch”. Needless to say that the Belgian has been the star player for Chelsea this season getting 3 assists in his past 2 games. The Belgian’s mesmerizing speed and his neat footwork has been a pain for defenders so far. 2 games 2 Man Of The Match performances can Hazard continue his run?
Player to watch-Newcastle United: Papis Cisse- Petr Cech probably still gets nightmares of “THAT” Papis Cisse goal when the 2 sides faced each other last time at Stamford Bridge. The striker is yet to open his goal scoring account this season but Chelsea will know the trouble he can cause and that too with a makeshift defense.
Match Facts-

Still Early Days: Why We shouldn't get Complacent