5 Talking points from this month

1. Eden Hazard: One man army– Stats don’t lie. Eden Hazard has by far been the most influential player for us this season. Last season there was a lot of pressure on Mata as he was the only one making those runs between the defenders and providing those perfect through balls but now with Hazard’s arrival the pressure on the little Spaniard has come down.

The season started off with a very embarrassing back heel blunder which gave the opposition fans something to laugh for. Though this did not stop Hazard from stamping his authority in the Premier League. His 2 assists in the 2-0 win over Wigan was followed by another wonderful display against Reading where he managed to better his performance with 3 assists. Hazard got his 1st goal in the Premier League against Newcastle after converting a spot kick past Tim Krul.

The young Belgian was brought in to make an immediate impact and he has certainly lived upto his potential. Looking at the stats in WhoScored.com he has been among the leading players in the league when it comes to key passes per game and dribbles per game. Though these are early days but if Hazard can continue his wonderful run of form, we could be in for some real treat.

2. Fernando Torres: Can he handle the pressure?– Once Drogba left Chelsea this season there were talks whether or not Torres could fill in this huge gap. The 50m pound striker has not lived upto his expectation and there were rumors that Chelsea were in the market for another striker (Edison Cavani,Jovetic and Falcao the rumored targets).

Fernando kicked off the season wonderfully with a goal against League champions Manchester City, but the following performance against Wigan and Reading were rather disappointing though he did manage to find the net against Reading but the overall display in the two games were far from quality. Torres’s best game of the season and arguably his best performance in a Chelsea shirt came against Newcastle. The Spaniard managed to win a penalty after he was brought down by Anita and then followed that piece of play with a wonderful finish past Tim Krul.

With Chelsea not signing a new striker in this window and Daniel Sturridge being the only genuine CF alongside Torres a lot rests on Torres. If Nando can continue finding the back of the net, we could be in for a real treat.

Cesar Azpilicueta: Chelsea finally ended their search for a Right Back after completing the signing of Azpilicueta. Mainly seen as a replacement for Jose Bosingwa, Azpilicueta certainly has the potential to challenge Branislav Ivanovic for the #1 RB spot.  He made 41 appearances for Marseille last season, including eight in the Champions League, and scored one goal. Azpilicueta’s strengths include his short passes, his ability to cross the ball not surprising considering he is Spanish. Coming to the defensive side of the game Azpilicueta is not the strongest player on the pitch but his tackling ability is one of his key strengths. Azpilicueta’s ability to play in the midfield makes him an amazing squad player.

Victor Moses: This guy needs no introduction. The Nigerian has been one of the most sought after players in the Premier League and his consistent performances for Wigan in the past few seasons has certainly helped his case. Moses’ amazing ability to run with the ball and dribble past defenders is just one of his strengths that make him an excellent winger. His ability to play in the #10 role and sometimes as a CF (not too sure about that) make him a very versatile player to have on the pitch.

4. Curious case of Florent Malouda: Last season Alex and Nico Anelka were asked to train with the U-21and park their cars in the reserve parking lot. This season it is Florent Malouda’s turn. From hero in the 09/10 season to such a downfall, things haven’t gone according to plan for the French winger. With Chelsea signing so many young, talented creative MF’s chances were always going to be hard to come by for Malouda and his failure to leave the club in the summer after rumored interests from Santos and Lyon meant Malouda was still a Chelsea player for the next 4 months. It is an unhappy chapter in a trophy-laden Chelsea career for Malouda who, since his arrival in 2007, has won the Champions League, the Premier League title and three FA Cups and was the club’s players’ player of the year in 2010. So is sending him to train with the U-21′s the best option? 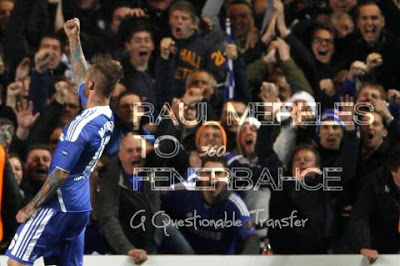 5. Good Bye Meireles and maybe Essien!– When the English transfer window ended you could sense that Chelsea had done a decent job in the transfer window but the happiness did not last long. Chelsea sold Raul Meireles to Turkish club Fenerbache on the deadline day of the Turkish transfer window. With Chelsea already short in the central midfield department with Lampard,Mikel,Romeu the only  players who can fill in and maybe Ramires, the decisions to loan out Essien to Real Madrid and to sell Meireles came as a surprise to many. Meireles was instrumental in Chelsea’s 2-0 win over Newcastle a week before and many thought he could be a perfect
replacement for Lampard in that role. Whether this is a good decision or a bad one we will soon find out!

PLAYER OF THE MONTH: EDEN HAZARD

GOAL OF THE MONTH: TORRES VS NEWCASTLE:

A Crown For A King; ECA's European Club of the Year: Chelsea FC