Shame on you plastics! In John Obi Mikel, I trust! 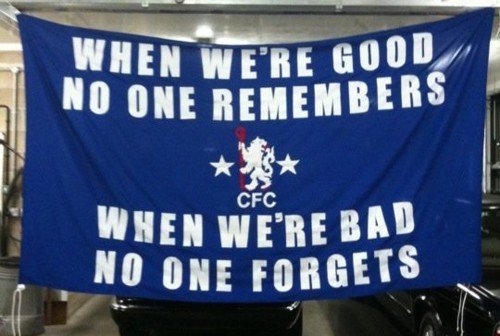 Chelsea Football Club is the symbol of this quote: “When we’re good no one remembers, when we’re bad no one forgets”. If we ourselves can’t adhere to such a policy, then can you call yourself a supporter?

I felt sick inside when I heard that our own fans had forced Mikel into deactivating his twitter account due to racist abuses. Those same fans somehow forgot that he was our man of the match in Munich over Drogba; along with Meireles stopped Messi from strutting his stuff in Camp Nou and over the years been fantastic and instrumental in our success. All because of one wrong kick of the ball.

Pundits and critics believed we had some of the best fans out there and I repeat SOME. The way we stood by John Terry, even after he missed the penalty in Moscow, even after he got a red card against Barcelona and almost gave away the Champions League trophy, despite all his scandals we sing There is only one England Captain. Why? Well, fellow fans, that’s because that is the Chelsea way of living life.
We believed in El Nino and he has been repaying our faith. In an interview, he said that the fans were singing his name even when he was on the bench. He missed a sitter against Manchester United and we still supported him. He went over 24 hours without scoring , but we still wore his jersey with pride.
So why not the same for Mikel? Is he different than the others? Is it just because, to the naked eye, the role of a defensive midfielder is useless?

Think of it this way. Under Ancelotti, we would not have done the double without him. He was one of the most integral parts of the squad that etched their name in the books of history. I plead to you, to think about the moments where he broke attack after attack for us and brought the ball forward.
We see Lampard score from distance and make defense splitting passes to Drogba. Roll back a few passes, and you can see Mikel breaking up a play initiated by our opponents.

What has happened is just pathetic. Our standards were already low against the rival fans, but now even under the eyes of the critics it has reached an all time low.
People are quick to forget what the three players have done for us. Back in the day, Kalou was a super sub, who when he came on, was an instant threat for the opposition. Malouda scored against Tottenham and QPR, despite being a substitute. Kalou  has decided its time to part ways and I always wish him the best, but if you dare every say that he was useless and did nothing, I want you to leave the club I adore.

The same goes for Malouda. Under Ancelotti, he played his best football, scoring important goals along with Drogba, that will forever be in my memory. He is bound to leave and I can only wish him the best. I sincerely plead you not to abuse them in any way. If you have become a Chelsea fan recently, then do try to find out what they have done for us.
Coming back to the case of Mikel. I criticise him for what he did, but I equally criticize John Terry for not properly initiating an offside trap, I equally criticize Frank Lampard for not pushing forward and giving Mikel more chances to pass and I equally criticize Petr Cech for not closing his legs when the shot was taken.

It’s easy to forget something good that a player has done for the club in a split second. That is what happened yesterday but in no way should we abuse our players. Mikel is a human, just like Terry, Torres, Lampard and Cech are humans and mistakes can happen at any given time.

With everything said and done, I plead you to stop the abuse and if you are going to criticize, criticize everyone responsible for the incident, not the person who can easily be picked on.

To all the plastic fans and gloryhunters who are apparenlty fangirls of my club, remember this. “If you can’t support us when we lose or draw, don’t support us when we win” – Bill Shankly
(function(d){ var js, id = ‘facebook-jssdk’; if (d.getElementById(id)) {return;} js = d.createElement(‘script’); js.id = id; js.async = true; js.src = “//connect.facebook.net/en_US/all.js#xfbml=1”; d.getElementsByTagName(‘head’)[0].appendChild(js); }(document));
Share FacebookTwitterGoogle+ReddItWhatsAppPinterestEmail

What We Learned From The Juventus Match

Can Chelsea try the False 9?

Tales from the Terrace #2: The Obi One For Me